Posted on March 8, 2014 by noachbenavraham

G‑d calls to Moses from the Tent of Meeting, and communicates to him the laws of the korbanot, the animal and meal offerings brought in the Sanctuary. These include:

• The “ascending offering” (olah) that is wholly raised to G‑d by the fire atop the altar;

• The “peace offering” (shelamim), whose meat was eaten by the one bringing the offering, after parts are burned on the altar and parts are given to the kohanim (priests);

• The different types of “sin offering” (chatat) brought to atone for transgressions committed erroneously by the high priest, the entire community, the king or the ordinary Jew;

• The “guilt offering” (asham) brought by one who has misappropriated property of the Sanctuary, who is in doubt as to whether he transgressed a divine prohibition, or who has committed a “betrayal against G‑d” by swearing falsely to defraud a fellow man.
Source: http://www.chabad.org/parshah/default_cdo/jewish/Torah-Portion.htm

AND G-D SPOKE TO HIM FROM THE TENT OF MEETING

The last five parshahs of the Book of Exodus explained the form of the Sanctuary and its vessels, and Exodus concluded with an account of how the completed Sanctuary was finally erected by Moses on the 1st of Nissan, almost one year after the Exodus from Egypt. With the erection of the Sanctuary, the Cloud of G-d’s Glory covered the Tent of Meeting.

“And He called to Moses.” (Lev. 1:1). G-d’s call to Moses, with which VAYIKRA opens, is the immediate continuation of the narrative with which Exodus concluded. Now that the Sanctuary was complete, the next step is for us to learn what is to be done in it. The book of VAYIKRA, which takes its name from its opening word, thus begins with the detailed commandments relating to the sacrifices, since these were to be the main activity in the Sanctuary and in the Temple throughout the generations.

Leviticus, the Latin name of VAYIKRA, corresponds to the name used by the rabbis of old when referring to this book: Toras Cohanim, “The Torah of the Priests”. The book is so called not only because much of it is taken up with the sacrificial services and other ritual practices (such as purification from leprosy) in which the role of the Cohen-Priest is central. In addition, G-d’s challenge to ALL of the Children of Israel was to be “a kingdom of PRIESTS and a holy nation” (Ex. 19:6). While only the Cohen-priest may officiate at the offering of sacrifices, they could be brought by all. Many of the other commandments in Leviticus relating to “holiness” apply not only to the Cohen-Priests but to all of us. At the very heart of Leviticus is Parshas KEDOSHIM, “Be holy.” (ch’s 19-20), which contains the fundamental laws governing man’s behavior to his fellows. This is explicitly addressed to all of the Children of Israel (Lev. 19:2). The book of VAYIKRA also contains commandments that apply to gentiles. These include the laws of sacrifices with which our present parshah of VAYIKRA, opens: the first commandment is that of KORBAN OLAH, the “elevation” or whole-burned offering, which both Israelites and Gentiles are eligible to bring.

It is an ancient tradition that little boys who have learned their Aleph-Beis and are just starting to read, commence their study of the CHUMASH (Five Books of Moses) with VAYIKRA. “Let pure souls come to study the laws dealing with purity.” For a cynical, sophisticated age that feels entitled to call anything and everything into question, the Torah code of sacrifices and purification may appear ancient, primitive, complicated and irrelevant. But if we are willing to explore the Torah with the fresh eyes of children, ready to take the word of G-d on trust, with faith and belief, we can discover that the sacrificial system contains the keys to repentance and the healing of the soul and the entire world.

The theme of sacrifices enters Genesis and Exodus in a number of places. Adam, Cain and Abel, Noah and Abraham all offered sacrifices. Moses’ declared purpose in taking the Children of Israel out of Egypt was to bring sacrifices, and the animal sacrifices brought at the time of the Giving of the Torah were described (Ex.24:5), as were the sacrifices that were to be brought at the inauguration of the Sanctuary (Ex. ch. 29). However, it is here in the opening parshahs of LEVITICUS that the sacrificial system of the Torah is laid out in detail. The universal significance of this teaching is brought out in the use by the Torah of the word ADAM in introducing the sacrificial commandments: “.when a MAN (ADAM) would bring a sacrifice.” (Lev. 1:2). The sacrificial system comes to heal man’s alienation from G-d through atoning for his sins and bringing him back into a relationship of peace with Him. This is the ultimate rectification of Adam’s sin of eating the fruit of the Tree of Knowledge of Good and Evil. This sin caused the mix-up of good and evil in this world that is the root of all subsequent sin.

VAYIKRA begins with the laws of the OLAH, “elevation” or “ascending” offering, which could either be an ox, a sheep or a goat, a dove or pigeon, or take the form of a MINCHAH offering of wheat in the form of flour or unleavened loaves or wafers. In the case of an animal OLAH offering, the blood of the animal was splashed on the sides of altar, while its fat and other portions were burned on the altar. The OLAH offering comes to atone not so much for “sins of commission” — something a person did — as for “sins of omission”, what he failed to do (such as if he failed to fulfil a positive commandment). The laws of OLAH are followed by the laws of SHELAMIM, the peace-offering, an animal sacrifice whose blood and fat were offered on the altar but whose meat was shared between the priests and the one who brought the offering. The SHELAMIM sacrifice is a celebration that signifies that man has made his peace with G-d.

Next come the laws of CHATAS, the sin-offering brought for unwitting violation of Torah prohibitions whose willful infringement carries the penalty of excision. Different kinds of animals are to be brought and different procedures of atonement apply depending on whether the sinner is a private individual, the “Prince” (Nasi, king or leader), the Supreme Court (Sanhedrin) or the High Priest. [Rashi on Lev. 4:22 comments: Happy is the generation whose leader is able to admit he made a mistake and who tries to make amends.]

The last part of Parshas VAYIKRA contains commandments relating to a variety of CHATAS (“Sin”) and ASHAM (“Guilt”) offerings for specific sins. It is noteworthy that while some of the sins in question are bound up purely with man’s relation with G-d (such as unwittingly entering the Sanctuary or eating sacrifices while ritually impure), there are certain sins in man’s behavior to his fellow men that also make him liable to a sacrifice. These include the sin committed by one who, having received goods or money on trust, subsequently denies it under oath. This is at once a sin against G-d and against the person from whom he received the goods or money. It is normal and natural for a person to choose a private place without witnesses in order to entrust someone with valuable goods or money for safekeeping. Besides the two people involved, the only other “witness” to the transaction is G-d Himself, who knows what really happened. If the trustee invokes the name of G-d to swear falsely in denial of what G-d knows, this is a denial of G-d Himself. Not only must the trustee return the goods or money together with a twenty-five per cent supplement. He must also make amends to G-d by bringing a sacrifice.

THE ARI ON THE MEANING OF THE SACRIFICES

“Know that all the different animals and birds have a soul which descends and is sustained by the CHAYOT (‘living animals’) of the Divine “Chariot” (Merkavah). The pure animals and birds are sustained by the Holy Chariot, while the impure animals and birds are sustained by the Unholy Chariot. Sometimes it happens that a soul falls and a person becomes wicked. As a punishment, this soul might be incarnated in an animal. When this animal is brought as a sacrifice (KORBAN), the effect is to bring this soul back close G-d again. Through the proper performance of the sacrificial ritual, the soul is brought back to its root and rectified. Even when the sacrificial animal is not an incarnation, it nevertheless contains holy sparks that fell at the time of creation and that are now rectified.

“When the impure animal aspect of man’s soul gains dominion over him, it causes him to sin. To rectify this, he must bring an animal as a sacrifice. The burning of the animal on the altar draws down an exalted fire that burns away the sins, drawing cleansing to the person’s animal soul from its very root. Since the impurity of the vegetable and inanimate levels is even greater than that of the animal level and also causes people to sin, they too must be represented on the altar in the form of the wine and flour libations and the salt.

“The sin of Adam caused good and evil to become mixed up, bringing a flaw into all the worlds and giving strength to the forces of evil. Accordingly G-d commanded man to bring together representatives of the inanimate, vegetable and animal realms. and through the service of the priests while the Levites sing, the Israelites stand by and the owner of the sacrifice repents, all of the worlds are cleansed and purified.

“When the Temple stands, the sacrifices elevated and purified all the fallen sparks. Today this is accomplished by the prayer services.” (Ta’amey HaMitzvos VAYIKRA). 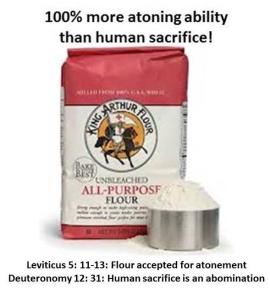 This entry was posted in Uncategorized and tagged Leviticus 1, offerings, Vayikra. Bookmark the permalink.