Posted on December 4, 2015 by noachbenavraham 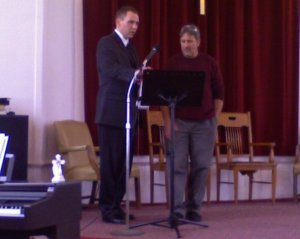 FRESNO — After repeated conflicts with his church board about the direction of Family Life Center, pastor Jim Morgan decided to leave the church. But on his way out he used a little-known clause in the bylaws to singlehandedly hire a new worship leader: Bill MacNerny who specializes in “alien folk music” and “tunes for chickens and other intelligent beings.” MacNerny was last employed as a street performer in Key West, Fla., and has made several albums of himself playing the ukelele and making barnyard sounds.

“We’re in a true bind,” says board member Jeff Garrety. “We couldn’t believe when this bozo showed up to lead worship.”

The quirk in the bylaws gave Morgan sole authority to hire and fire the worship leader and to define contract terms. The contract includes a severability clause of $150,000 if MacNerny is fired before two years. It also specifies that he must lead worship on Sunday mornings and any other time the church meets. Lawyers informed the board that the contract is legitimate and must be respected.

On a recent Sunday morning, MacNerny opened the service with a rendition of “Amazing Grace” in which he encouraged audience members to make “Martian noises.” Few people joined in. He then segued into “This Old Man, he played one, he played knick-knack on my thumb” and seemed unfazed by people’s non-participation. 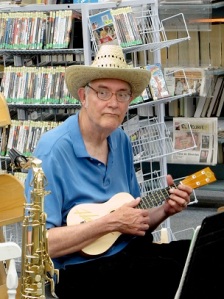 The church has tried to work around MacNerny by cranking the volume of everyone else on stage and having other musicians wear brightly colored clothing. Still, it’s hard to look past his signature look which he describes on his web page as “Where exactly am I?”

“It saps part of your soul to show up Sunday morning and see Bill in his undersized cowboy hat, strumming the ukelele,” says one man. “A lot of people are trying out other churches.”

Some want the church to pay $150,000 just to get rid of MacNerny. Others want to make the best of it for two years and say it could bolster small group participation.

After making a series of weird noises he describes as “me entering the room,” MacNerny says in a phone interview that he is happy to be at Family Life Center because it offers a built-in audience and less reliance on tips. Street performing taught him to hold people’s attention, a skill he hopes to employ at the church, along with “making sure people get their proper amounts of gamma rays, and also consider poultry ownership,” he says.

Morgan, in between ministry assignments and living in Georgia, says he thinks MacNerny makes a good fit for the church, and for the board members.

GET YOUR COPY HERE!

THE PERSONAL EXPERIENCES THROUGH, AND OUT OF RELIGION

Pathways to the Biblical Truth

A desire for the rock-bottom, absolute truth led AJ Ostrander through many fields, mountains, and valleys. With an unquenchable thirst for error-free Biblical accounts, a path was discovered. Sometimes this path led through revelations that seemed right, but always turned out wrong.

In this book, the reader will witness how AJ, and his family, journeyed through: Christianity, Atheism, Christianity (again), Messianic Judaism, Hebrew Roots, Nazarene Judaism, and finally REALITY.

A journey through religion to find oneself

AJ thought he was the only one to travel down this path, as there were no resources available to him, or anyone for that matter at the time. Once he made it through, however, he found a huge community of others awaiting, having traveled the same path.  AJ Ostrander set out to document the journey, and once he teamed up with Pathways Radio, others are discovering they don’t have to make the journey alone!

The Most Amazing Billie Jean Cover You’ll Ever See  (ukulele)

This entry was posted in Satire, Uncategorized and tagged ukelele. Bookmark the permalink.