What is a Soul?

Posted on October 7, 2013 by noachbenavraham 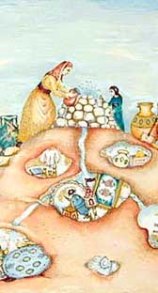 The soul is the self, the “I” that inhabits the body and acts through it. Without the soul, the body is like a light bulb without electricity, a computer without the software, a space suit with no astronaut inside. With the introduction of the soul, the body acquires life, sight and hearing, thought and speech, intelligence and emotions, will and desire, personality and identity.

Everything Has a Soul

In truth, not just the human being, but also every created entity possesses a “soul.” Animals have souls, as do plants and even inanimate objects; every blade of grass has a soul, and every grain of sand. Not only life, but also existence requires a soul to sustain it–a “spark of G-dliness” that perpetually imbues its object with being and significance. A soul is not just the engine of life; it also embodies the why of a thing’s existence, it’s meaning and purpose. It is a thing’s “inner identity, it’s raison d’être. Just like the ‘soul’ of a musical composition is the composer’s vision that energizes and gives life to the notes played in a musical composition–the actual notes are like the body expressing the vision and feeling of the soul within them. Each soul is the expression of G-d’s intent and vision in creating that particular being.”1

But it is the human soul that is both the most complex and the most lofty of souls. Our sages have said: “She is called by five names: Nefesh (soul), Ruach(spirit), Neshamah (breath), Chayah (life) and Yechidah (singularity).”2 The Chassidic masters explain that the soul’s five “names” actually describe five levels or dimensions of the soul. Nefesh is the soul as the engine of physical life. Ruach is the emotional self and “personality.” Neshamah is the intellectual self. Chayah is the supra-rational self–the seat of will, desire, commitment and faith. Yechidah connotes the essence of the soul–its unity with its source, the singular essence of G-d. For the essence of the soul of man is “literally a part of G-d above”3–a piece of G-d in us, so to speak.

The Chassidic masters speak of two distinct souls that vitalize the human being: an “Animal Soul” and a “G-dly Soul.” The Animal Soul is driven by the quest for self-preservation and self-enhancement; in this, it resembles the soul and self of all other creations. But we also possess a G-dly Soul”–a soul driven by the desire to reconnect with its Source. Our lives are the story of the contest and interplay between these two souls, as we struggle to balance and reconcile our physical needs and desires with our spiritual aspirations, our self-focused drives with our altruistic yearnings. These two souls, however, do not reside “side-by-side” within the body; rather, the G-dly Soul is enclothed within the Animal Soul–just as the Animal Soul is enclothed within the body. This means that the Animal Soul, too, is vitalized by the “part of G-d above” at its core. Ostensibly, the two souls are in conflict with each other, but in essence they are compatible.4

The Divine essence of the human soul is what sets the human being above and apart from all other creations, even the angels. The angel may be more spiritual, but the human being is more G-dly. No creation can possess true freedom of choice–a creation, by definition, has and consists of only what its creator has imparted to it; this is its “nature,” and its every inclination and action will be dictated by that nature. It is only in the human soul that the Creator imparted of His own essence. The human soul is thus the only truly “supra-natural” being (aside from the Creator)–a being that is not limited by its own nature. A being that can transcend itself; a being that can choose to not merely react to its environment, but to act upon it; a being whose choices and actions are therefore of true significance.

Why a Physical Life?

A soul is formed in the womb of supernal spiritual realms, where it acquires its distinct identity and mission. To fulfill this mission, it is dispatched to the physical realm, enclothed within an Animal Soul and equipped with a body. Here the G-dly Soul is challenged by the (apparently) conflicting needs and desires of the Animal Soul; here divine reality is obscured by the dense selfhood of the body and physical world. In this arena of hidden truth and perpetual challenge, the soul can fully express and actualize its divine power.5

The soul is provided with a compass and guidebook to navigate the challenge of physical life, and the resources to fortify it. The Torah is the divine “blueprint for creation” that guides and instructs the soul on its mission in life. The Torah is also “food for the soul”: by studying Torah the soul ingests and digests the divine wisdom and is supplied with the divine energy to persevere in its mission and overcome its challenges.

A mitzvah is a G-dly deed. Every time a soul performs a mitzvah–giving a coin to charity, putting on tefillin, lighting Shabbat candles–it acts as a “partner with G-d in creation” and brings G-d’s presence into the world. The mitzvot are all physical deeds–so the soul can perform them only while a resident of the physical world, invested within an Animal Soul and a body. Thus the duration of its physical life is the soul’s only opportunity to perform mitzvot. Everything that comes before and after is just a prequel and sequel to the soul’s greatest and loftiest moments–its acts of connecting the G-dly with the mundane.

Upon conclusion of its physical life-span, the soul resumes a purely spiritual state. It can no longer perform mitzvot, but the G-dly deeds it performed during its physical lifetime have elevated it to heights it could not even had contemplated before its descent. These mitzvot are like seeds which take root in the soil of the physical world and grow and multiply, further fueling the soul’s ascent; as do the good deeds performed in the physical world by others for the merit of the departed soul.

The World to Come

Ultimately, the soul will reunited with the body. In the Messianic Era, the resurrection of the dead will usher in a “World to Come” of eternal physical life, in which “death will be eradicated forever.”6 In the World to Come, the entirety of creation will fully and uninhibitedly reflect the infinity and perfection of its Creator, and the physical will transcend the finitude and mortality which define it in today’s imperfect world.

This entry was posted in Uncategorized and tagged Chayah, mitzvah, Nefesh, Neshamah, Ruach, Soul, The Torah, World to Come, Yechidah. Bookmark the permalink.